On Saturday we went to a Patio Party at the historical properties on the Halifax waterfront.  It is a great summer venue a few steps away from the Halifax harbour.  The warm evening encouraged walking so the waterfront was a busy spot.  Tourists visiting the city and those who call the Halifax  home were out enjoying the evening and the show.

The Lower Deck, a well known Halifax pub and music venue in Privateer’s Warehouse had bands playing inside and outside.

Pogey was playing outside between two beautiful stone buildings. The word ‘Pogey’ is defined as financial or other relief given to the unemployed by the government.  Pogey has been touring since 2001 providing ‘relief’ to audiences with their enthusiastic Nova Scotia Celtic rock sounds, their exuberant instrumentals and their tight harmonies. The band, Ray Mattie guitar and lead vocals, Warren Robert guitar and vocals, Jonny Grant bass guitar and vocals, guest fiddler Anthony Rissesco and drummer Mike Carroll had the crowd dancing, singing and totally engrossed in their highly interactive show. 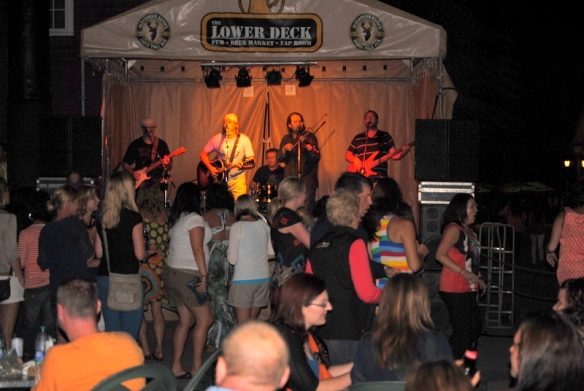 Band members have played at every major Irish festival in North America and are off again to the Kansas City Irish Festival next week. 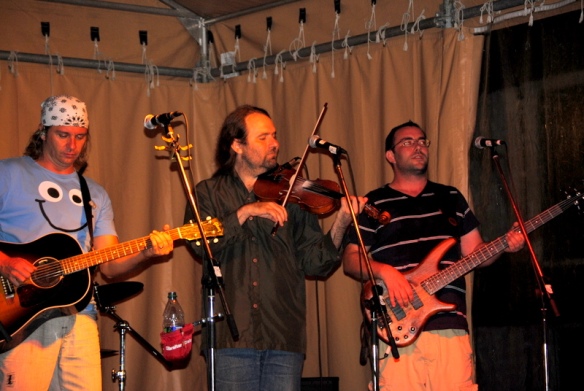 For more information on the band and their touring schedule visit their website at http://www.pogey.ca.